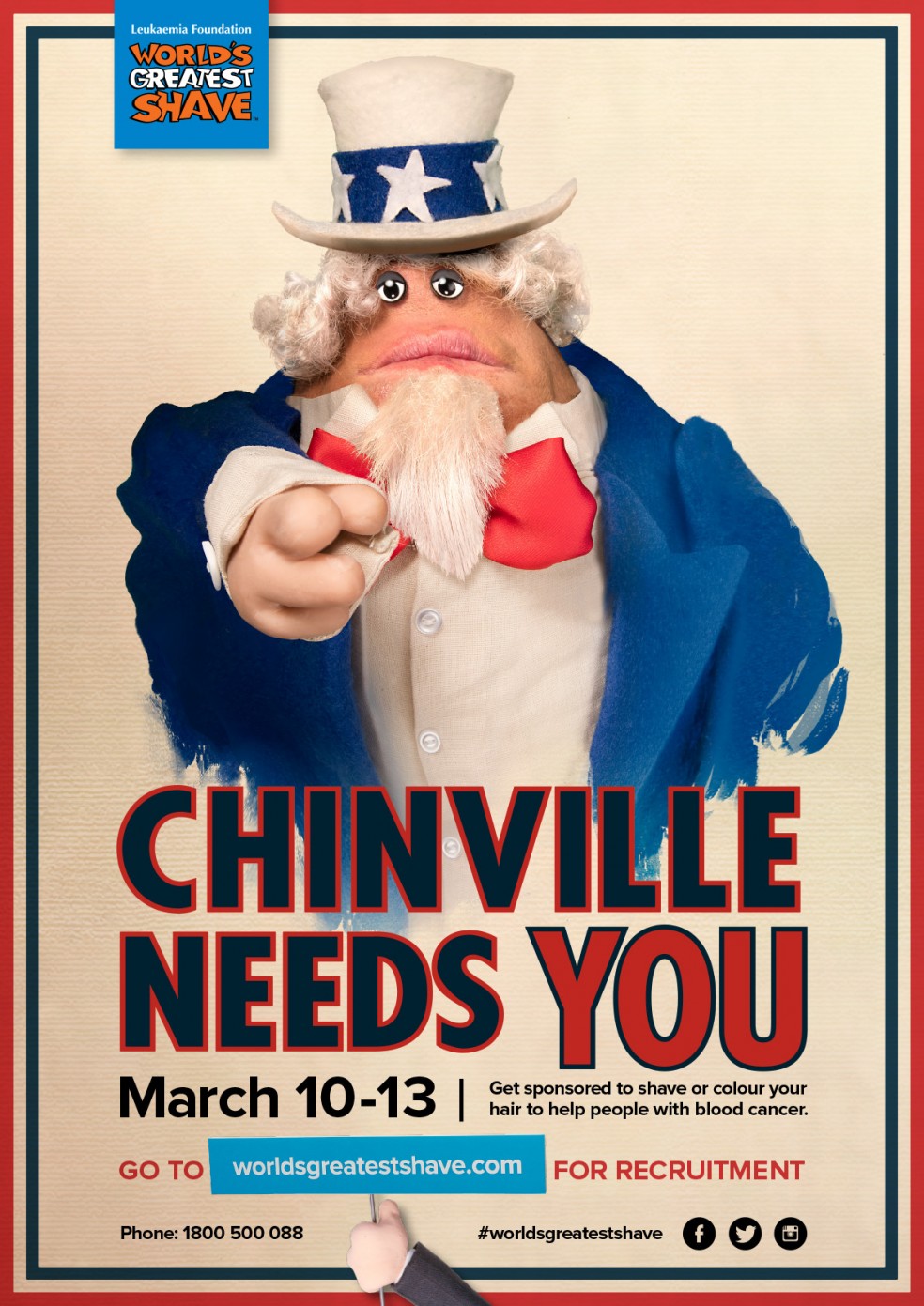 Welcome to Chinville from League Tragic on Vimeo.

The World’s Greatest Shave featuring upside down chins has built up huge amount of creative equity in the campaign. So much so, that recall for the event outweighs the parent brand Leukaemia Foundation. The campaign has high impact and is tonally appealing with adults and also a younger audience with its positive, cheerful and optimistic message, something that can be difficult to achieve in the charity sector.

Traditionally each year, the campaign would rely on a different idea or chin character to promote the event, sometimes to the detriment of the cause as the characters could get in the way of the messaging, while also losing campaign consistency through tone and visual execution.

After a pitch process, I was tasked with refreshing the campaign for 2016. Working with some solid research through Colmar Brunton we developed a creative platform that could be built on rather than having to reinvent the wheel each year. The idea of ‘Chinville’ was created as a way to unite the campaign, anchoring it within a community – something that resonates with participants.

‘Chinville’ – Birthplace of the World’s Greatest Shave is an extraordinary place where everyone shaves or colours their hair to help people with blood cancer.
And every town needs a spokesperson, so our ‘Mayor’ of Chinville features in all 3 TV spots introducing different characters called ’Chinions’ along the way. 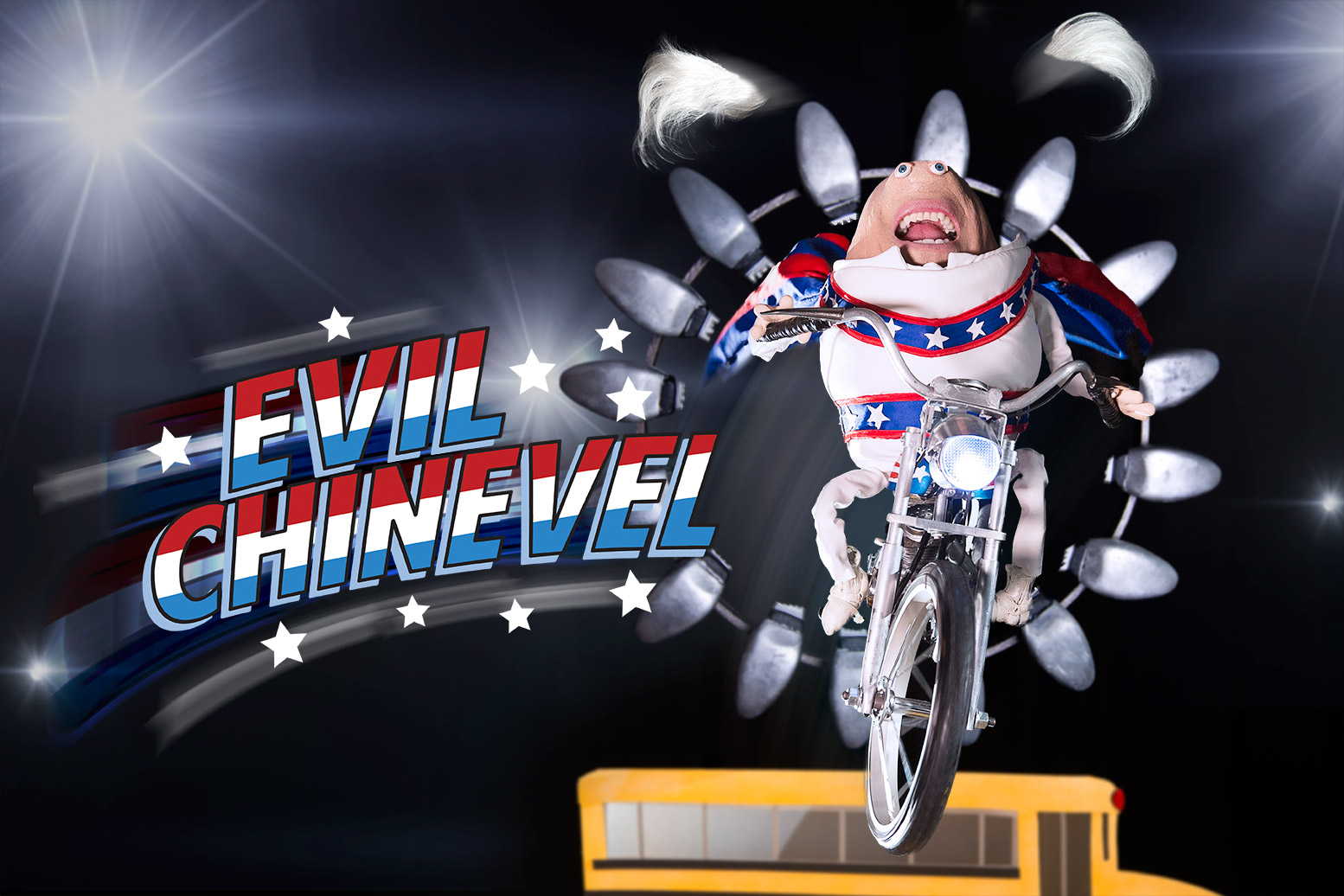 ‘Evil Chinevel’ is a daredevil that goes to great lengths to shave his hair while ‘Houchini’ shows off his unique skills while colouring for the cause. There’s numerous other characters that we’ve introduced, including pulling together a Chinion band in the style of ‘Band Aid’ to sing the classic Midnight Oils’ song Blue Sky Mine – “Who’s gonna shave me?”

For 2016 we also wanted to move the campaign on visually. In previous years, the chins were limited to shoulder up, we never saw past their chests and to develop the characters we really needed more movement. Working with John Lewis through Clockwork Films, we brought a puppet like feel to the Chins, adding arms and legs to their bodies so that we could explore a range of movements to help with some of the nuances for the characters we’d created.

People really emphasis with an idea if they understand how it’s been created and part of the attachment to the campaign is that it you have an idea as to how it’s been made.

In the past, the spots had relied heavily on green screen with actors lying down with very limited movement. This year to create our scenes and scenarios we shot a lot in camera by creating sets upside down and had the actors stand in them. The sets weren’t overly styled which fit well with the puppet style look, giving it a simple feel which made the spots feel not too ‘big budget.’ A stigma some charities face when it comes to their marketing spend.

Aside from 3 x 30sec TVC’s, 3 x 15sec cutdowns and 2 Radio spots, we produced print and digital ideas to help the Chinville idea live through other channels.

Digital plays an important role in a campaign like Chinville as it’s instantly a community that can be joined and expanded on as the idea evolves over the years. We can offer people a fun and easy way to announce their participation and gather generous financial support from their family, friends and colleagues locally and abroad by sharing their experience online.

It’s also an idea that can keep the campaign alive post-shave through added engagement with participants and donors alike.

Anthem from League Tragic on Vimeo.

Churchill from League Tragic on Vimeo.